It’s no secret that America and similarly developed nations are dominated by large corporate farms. The United States Department of Agriculture estimates that 91% of U.S. farms are “small farms,” meaning they have a gross cash farm income of $250,000 or less. Don’t let that number fool you; the remaining nine percent is responsible for the vast majority of production. A few months ago we wrote an article about cropland consolidation in the U.S. Midpoint acreage is the point at which half of the farms are above the stated acreage and half are below. It’s a more effective way of measuring farm growth in this country. The USDA estimates that between 1987 and 2007, the midpoint acreage nearly doubled, jumping from 589 to 1105. Given that the mean acreage is roughly unchanged, this means that the middle is diminishing and farms are generally very big or very small. Only a few hundred years ago, Thomas Jefferson stood contemplating the expanse of Albemarle County and envisioning the future. In it, he pictured a sustainable agrarian society with yeomen farmers working the central Virginia land with their families and interacting directly with their communities. In our present day, the property in Albemarle County and other places in the Piedmont region is still well-suited to small farming. Unlike the Midwest or the Mississippi Delta, land in central Virginia lacks the contiguous, seemingly endless stretches of open land that make it ideal for mass farming. But small farms have a few advantages that are worth considering.

Technically speaking, small farming is more efficient than the larger, conglomerate alternative. “Efficiency” takes on different meanings depending on context. Certainly we must consider the economies of scale at work. Mechanization replaced animal husbandry in the last two centuries, and bigger farms were certainly on the winning end of this paradigm shift. The bigger the farm, the more access its owners have to capital technologies. If you own a farm with autonomous vehicles and GPS tracking for precision agriculture, you can save money on labor and overtime and use these savings/profits to expand. You also save on processing of harvest, transportation, etc. This is efficiency in a sense, definitely. From a monetary perspective, the bigger your farm, the better. It helps cut down on costs if you specialize in one or a few products too. From that perspective, it is efficient.

But small farms are more efficient in the sense that they do more with the land provided. Consider this a diseconomy of scale. There exists an inverse relationship between farm size and production per unit that is a testament to the supervision and utilization of labor present on small farms. Or perhaps it’s a testament to the amount of money big farms save on capital technology and input production costs; it’s worth it for them to have less efficient labor systems. When labor costs are an important consideration (as in the farming of specialty crops), small farms have an advantage. Things like quality of labor and local knowledge become important factors. We’re in central Virginia here, but it’s worth mentioning that in developing nations, farm size is actually decreasing. Population growth causes a subdivision of farm property…it’s actually less profitable to run a big farm in most places, because there are no (or fewer) economies of scale.

Agricultural practices tend to be more environmentally sustainable on small farms. Monocropping refers to the farming of only one crop. It is often conflated with the idea of specialization, even though they are not exactly the same thing. Focusing on one or two products makes sense from an an economical standpoint, because you consolidate resources by using the same inputs (fertilizer, machinery, herbicides, etc.) This even extends to the more intangible resources like knowledge and expertise, and soil quality. People will argue that monocropping exists because soil in certain areas is well-suited to certain crops and ill-suited to others. For example, the rolling uplands make land in central Virginia very good for cultivating orchards and vineyards, and there definitely are a lot of those on properties in Albemarle County and other places. This is certainly true, but excessive monocropping is not good for the soil. It leaves it fallow during the months when it’s not in use, and depletes it of the same nutrients time and time again. This makes the farmer reliant on fertilizer to replenish the soil, and pesticides to keep at bay the numerous pests who have a preference for certain crops. By contrast, a great many small farms practice crop rotation. This is sustainable agriculture at its finest. By rotating crops, you avoid the unwanted consequences of depleting the same soil over and over. Pests become less accustomed to getting their favorite snacks consistently. Mixing crops also makes weather less of a factor when considering adverse conditions for a farmer, since chances are you’ll be using different parts of the soil at different times. Depending on where you’re at, crop rotation also leaves a farmer less susceptible to financial risk. With monocropping, you’re essentially (and sometimes literally, if you own a chicken farm) “putting all your eggs into one basket.”

The history of agriculture is dominated by small farms. At risk of presenting an overly idealized vision, we would hazard to say that farmers interacting with their immediate natural surroundings in a positive way is a “good thing.” Permaculture is the concept of the farm as part of the surrounding ecosystem, and farmers who practice it strive to either directly use or simulate pre existing ecological conditions without seeking to significantly alter the landscape in the name of productivity. In a previous article, we mentioned Timbercreek, a farm in Albemarle County that utilizes natural systems in its agricultural practices, particularly its grazing. The grazing of animals (especially cows) is often very detrimental to the environment. Managed intensive rotational grazing is a system in which grazing animals are systematically moved to different regions of pasture. Timbercreek’s model is similar to other small organic farms in that its aim is to utilize as much land as possible. This system begins with cows (sheep, goats and other ruminants could take their place) grazing an area of the farm, clearing the tall, leafy stalks as they continue in a pre-planned progression. Chickens and other poultry follow the path, grazing on the insects, worms, and underbrush left behind by the cows. As the chickens move forward, the pasture is given time to grow replenish its nutrients while animals are eating other regions. This system isn’t utilized on bigger farms because it’s fairly labor-intensive. By and large, labor is something large farms try to avoid as much as possible, preferring mechanization and automated systems to take the place of the human. Such is the natural progression; agriculture may have spurred industrialization, but it is hardly the only area where its effects are felt. When you have the resources of a big farm, it’s less cost-efficient to hire labor because it’s harder to adequately supervise a workforce that big, and you’ve often got the resources to use machines. Another benefit of small farming is that it promotes the local economy, both the farming and non-farming economy, and we see shares of incremental income go into the economy. Big conglomerate farms don’t really do much for the surrounding rural poor, but the majority of the population in the developing world makes its living on what would be considered small farms.

One of the most important things that small farms give us is biodiversity. The idea of biodiversity in agriculture is practically married to the history of the domesticated crops. The early farmers weren’t cultivating crops for entire national or even city populations. As such, this modern idea of homogenized agriculture would have been completely alien to them, and is probably pretty foreign to modern small farmers in the developing world. Genetic diversity tends to be concentrated in certain areas, and these are likely some of the oldest crop centers in human history. In the mid-90s, the International Maize and Wheat Improvement Center reported that Mexcio had 4,220 of the new maize accessions. Guatemala had 590. The U.S. (which contains three times the combined acreage of both countries) only added 43 new strains (Boyce). Mexican farmers grow over 5000 varieties of maize, whereas in the U.S. (with its 70 million acres), more than 70% of the land is used to crow no more than half-a-dozen different genetic lines (Boyce). High-diversity farming requires more intensive labor…you have to account for differences in soil requirements, harvest times, etc. It needs more time and effort on behalf of the farmers, who must have an intricate knowledge of different crop varieties and their relationships to microhabitat variation, the specific attributes of each variation, etc. Large farms simply aren’t equipped to do this.

But there are problems with low-diversity agriculture, as you’d guess. Insects and plant pathogens are constantly evolving, and they are very adaptable, especially when you plant a few species of corn across several thousand acres. The average commercial lifespan of corn in the U.S. is only seven years, after which the strain is rendered obsolete and becomes highly susceptible to newly-evolved pests. Consider the southern corn leaf blight epidemic of the 1970s. Prior to the epidemic, American seed companies aimed to cut down on labor costs by using sterile male cytoplasm, eliminating the need for laborers to de-tassle corn by hand. It’s estimated that the seed was bred into 90% of the maize in Texas…this strain was also highly susceptible to the pathogen bipolaris maydis which causes the fungal Southern leaf corn blight. In 1970, it spread rapidly from the South to the Northeast and Midwest. It’s estimated that the U.S. lost over a billion dollars in corn sales that year. Biodiversity is what fuels agriculture. It’s foolish to assume that we’re at the end of the agricultural timeline, that we’ve discovered all the foods we’re ever going to need to eat. Small farms preserve and cultivate several different genetic varieties of a crop, and this is vital for human survival, whether it is extremely profitable or not. If you’ve got any interest in owning rural property in central Virginia, you have a chance to be part of something greater than the sum of its parts. And in a city like Charlottesville, with its culinary accolades and thriving farm-to-table aesthetic, owning a small farm could be more profitable than you think.  Give us a call today and let’s get started finding your ideal farm in Virginia! 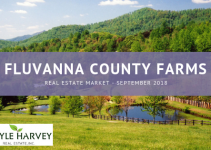